bayesboot: An R package for doing the Bayesian bootstrap

The implementation in bayesboot can handle both summary statistics that works on a weighted version of the data (such as weighted.mean) and that works on a resampled data set (like median). As bayesboot just got accepted on CRAN you can install it in the usual way:

You’ll find the source code for bayesboot on GitHub. If you want to know more about the model behind the Bayesian bootstrap you can check out my previous blog post on the subject and, of course, the original paper by Rubin (1981).

A simple example of bayesboot in action

The resulting posterior distribution over probable mean heights can now be plotted and summaryized: 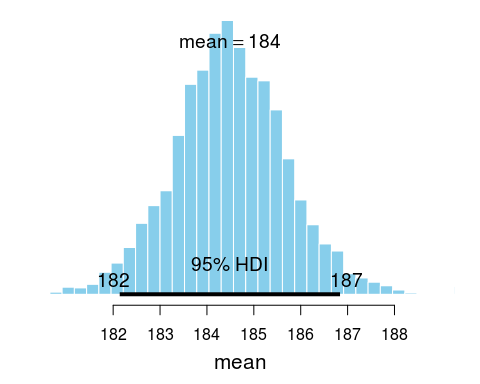 A shout-out to Mike Meredith and John Kruschke who implemented the great BEST and HDInterval packages which summary and plot utilizes. Note here that the point mean in the summary and plot above refers to the mean of the posterior distribution and not the sample mean of any presidents.

The result will be almost the same as before, but the above will be somewhat faster to compute.

If we want to compare the means of two groups, we will have to call bayesboot twice with each dataset and then use the resulting samples to calculate the posterior difference. For example, let’s say we have the heights of the opponents that lost to the presidents in height the first time those presidents were elected. Now we are interested in comparing the mean height of American presidents with the mean height of presidential candidates that lost. 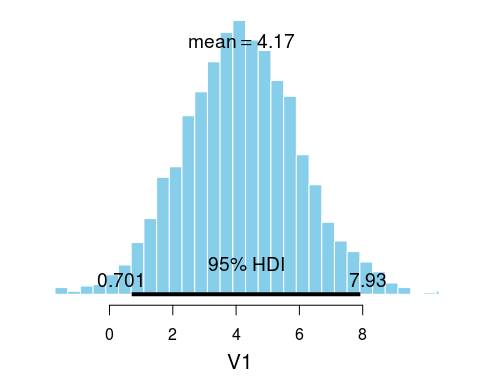 So there is some evidence that winning presidents are a couple of cm taller than loosing opponents. (Though, I must add that it is quite unclear what the purpose really is of analyzing the heights of presidents and opponents…)

The README and documentation of bayesboot contains more examples. If you find any bugs or have suggestions for improvements consider submitting an issue on GitHub.