A while back I wrote about how the classical non-parametric bootstrap can be seen as a special case of the Bayesian bootstrap. Well, one difference between the two methods is that, while it is straightforward to roll a classical bootstrap in R, there is no easy way to do a Bayesian bootstrap. This post, in an attempt to change that, introduces a bayes_boot function that should make it pretty easy to do the Bayesian bootstrap for any statistic in R. If you just want a function you can copy-n-paste into R go to The bayes_boot function below. Otherwise here is a quick example of how to use the function, followed by some details on the implementation.

Update: I’ve now created an R package that implements the Bayesian bootstrap, which I recommend instead of using the function described in this post. You can install it by running install.packages("bayesboot") in R and you can read more about it here. The implementation is the same as here, but the interface is slightly different.

So say you scraped the heights of all the U.S. Presidents off Wikipedia (american_presidents.csv) and you want to run a Bayesian bootstrap analysis on the mean height of U.S. Presidents (don’t ask me why you would want to do this). Then, using the bayes_boot function found below, you can run the following:

Here is how to get a 95% credible interval:

And, of course, we can also plot this: 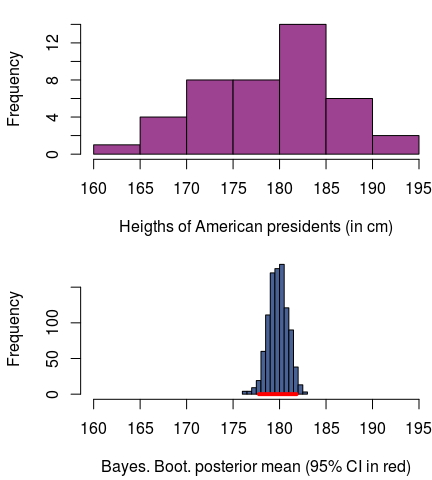 (Here, and below, I will save you from the slightly messy plotting code, but if you really want to see it you can check out the full script here.)

Now, say we want run a linear regression on presidential heights over time, and we want to use the Bayesian bootstrap to gauge the uncertainty in the regression coefficients. Then we will have to do a little more work, as the second argument to bayes_boot should be a function that takes the data as the first argument and that returns a vector of parameters/coefficients:

Ok, so it is not really over time, as we use the order of the president as the predictor variable, but close enough. Again, we can get a 95% credible interval of the slope:

And here is a plot showing the mean posterior regression line with a smatter of lines drawn from the posterior to visualize the uncertainty: 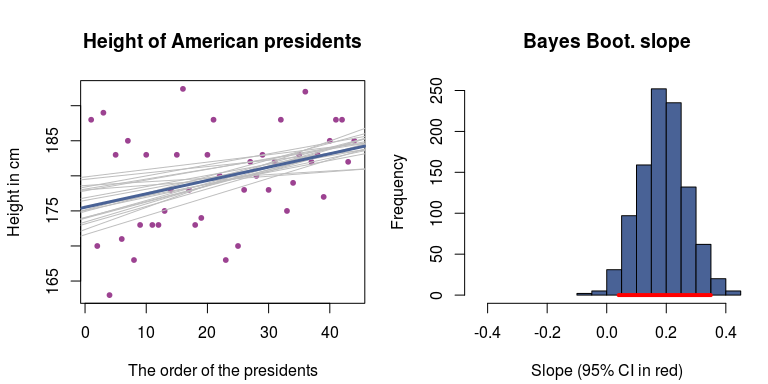 How to implement a Bayesian bootstrap in R

It is possible to characterize the statistical model underlying the Bayesian bootstrap in a couple of different ways, but all can be implemented by the same computational procedure:

One way to characterize drawing from an n-dimensional uniform Dirichlet distribution is as drawing a vector of length n where the values are positive, sum to 1.0, and where any combination of values is equally likely. Another way to characterize a uniform Dirichlet distribution is as a uniform distribution over the unit simplex, where a unit simplex is a generalization of a triangle to higher dimensions, with sides that are 1.0 long (hence the unit). The figure below pictures the one, two, three and four-dimensional unit simplex:

2. Calculate the statistic using a Dirichlet draw to weight the data

Here is where, if you were doing a classical non-parametric bootstrap, you would use your resampled data to calculate a statistic (say a mean). Instead, we will want to calculate our statistic of choice using the Dirichlet draw to weight the data. This is completely straightforward if the statistic can be calculated using weighted data, which is the case for weighted.mean(x, w) and lm(..., weights). For the many statistics that do not accept weights, such as median and cor, we will have to perform a second sampling step where we (1) sample from the data according to the probabilities defined by the Dirichlet weights, and (2) use this resampled data to calculate the statistic. It is important to notice that we here want to draw an as large sample as possible from the data, and not a sample of the same size as the original data. The point is that the proportion of times a datapoint occurs in this resampled dataset should be roughly proportional to that datapoint’s weight.

Bringing it all together

Below is a small example script that takes the presidents dataset and does a Bayesian Bootstrap analysis of the median height. Here n1 is the number of bootstrap draws and n2 is the size of the resampled data used to calculate the median for each Dirichlet draw.

If we were interested in the mean instead, we could skip resampling the data and use the weights directly, like this:

If possible, you will probably want to use the weight method; it will be much faster as you skip the costly resampling step. What size of the bootstrap samples (n1) and size of the resampled data (n2) to use? The boring answers are: “As many as you can afford” and “Depends on the situation”, but you’ll probably want at least 1000 of each.

Here follows a handy function for running a Bayesian bootstrap that you can copy-n-paste directly into your R-script. It should accept any type of data that comes as a vector, matrix or data.frame and allows you to use both statistics that can deal with weighted data (like weighted.mean) and statistics that don’t (like median). See above and below for examples of how to use it.

Caveat: While I have tested this function for bugs, do keep an eye open and tell me if you find any. Again, note that doing the second resampling step (use_weights = FALSE) won’t work if the statistic changes with the sample size!

Update: Ilanfri has now ported the bayes_boot function to Python.

Let’s start by drawing some fake data from an exponential distribution with mean 1.0 and compare using the following methods to infer the mean:

Then running the four different methods:

Here are the resulting posterior/sampling distributions: 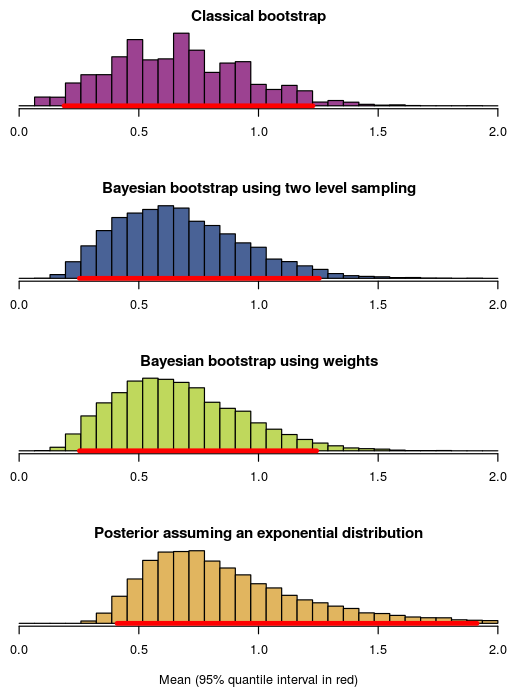 This was mostly to show off the syntax of bayes_boot, but some things to point out in the histograms above are that:

Finally, a slightly more complicated example, where we do Bayesian bootstrap analysis of LOESS regression applied to the cars dataset on the speed of cars and the resulting distance it takes to stop. The loess function returns, among other things, a vector of fitted y values, one value for each x value in the data. These y values define the smoothed LOESS line and is what you would usually plot after having fitted a LOESS. Now we want to use the Bayesian bootstrap to gauge the uncertainty in the LOESS line. As the loess function accepts weighted data, we’ll simply create a function that takes the data with weights and returns the fitted y values. We’ll then plug that function into bayes_boot:

To plot this takes a couple of lines more: 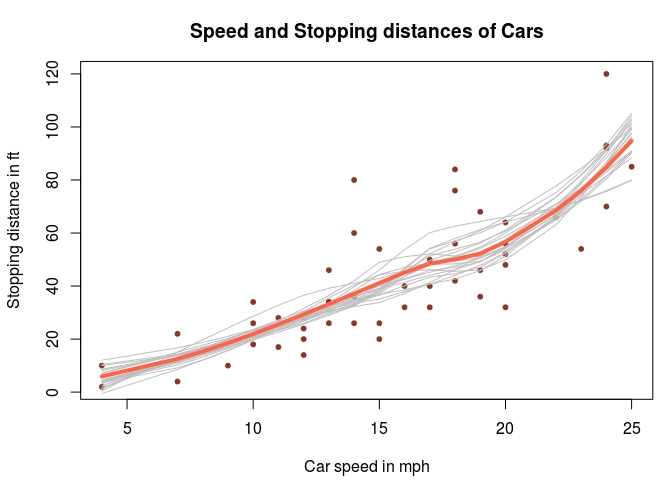 Fun fact: The cars dataset is from the 20s! Which explains why the fastest car travels at 25 mph. It would be interesting to see a comparison with stopping times for modern cars!