Importance sampling is a method that can be used to estimate the integral of a function even though we only have access to the density of that function at any given point. Using a further resampling step, this method can be used to produce samples that are (approximately) distributed according to the density of the given function. In Bayesian statistics this is what we often want to do with a function that describes the density of the posterior distribution. In the case when there is more than one free parameter the posterior will be multidimensional and there is nothing stopping importance sampling from working in many dimensions. Below I will only visualize the one dimensional case, however. 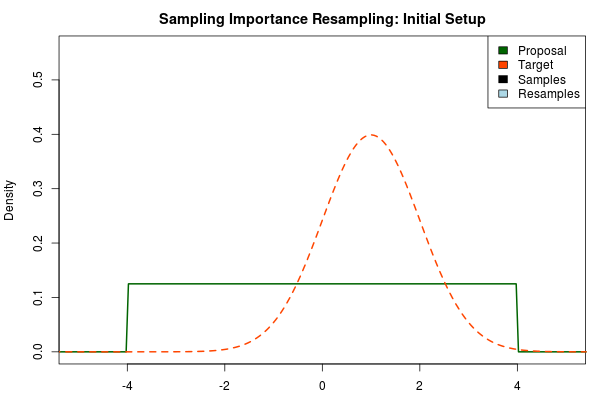 Here, the target distribution is actually a $\text{Normal}(\mu=1,\sigma=1)$ distribution, but most often we do not know its shape.

Now, there are two issues that need consideration. First, it might actually be a better idea to resample without replacement. If we are unlucky in the initial sampling phase and draw a sample that is extremely unlikely according to the proposal distribution, but very likely according to the target distribution, this sample will get a huge probability. If we are sampling with replacement the value of that sample might end up dominating the distribution of the resulting resamples. Sampling without replacement is more robust, but on the downside we have to produce far more samples in the first sampling phase than we draw resamples in the resampling phase. 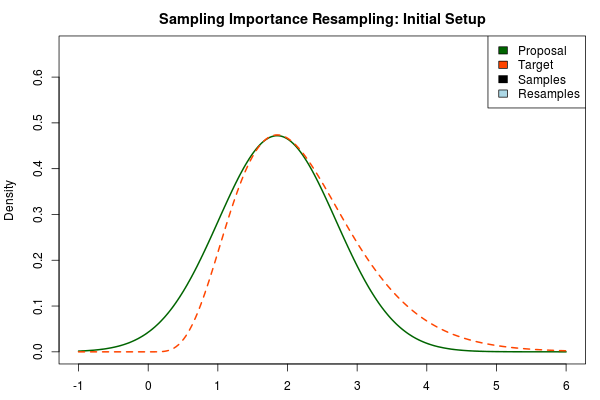 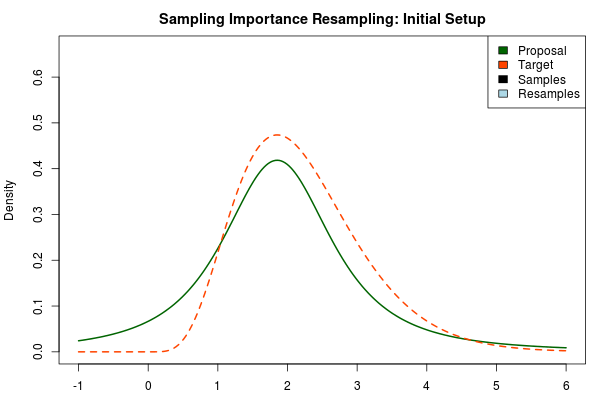 Being confident that we now have an adequate proposal distribution we can continue with the importance sampling:

Note that in the above animation we sample with replacement but, as argued earlier, it might actually be a good idea to sample without replacement.

Using the function below it is possible to do Laplace approximation of a Bayesian model followed by an optional importance sampling step. The function is designed along the same lines as the one in Easy Laplace Approximation of Bayesian Models in R and requires you to have the coda package and the mvtnorm package installed. The function takes the following arguments:

The function returns the samples (or resamples) as an mcmc object which means that we can use the handy functions from the coda package to inspect the result. Here is now the function importance_laplace_approx (including the helper function log_sum_exp) :

Let’s try it out on the model from Three Ways to Run Bayesian Models in R, that is:

Here is the corresponding model function calculating the unnormalized log posterior of the model above given a parameter vector p and a vector of datapoints y.

First let’s run a Laplace approximation without the resampling step by letting no_resamples = 0 (the default): 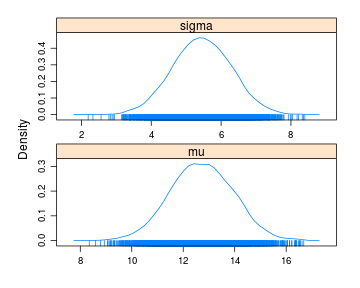 Hmmm, why the warnings? Well, the importance sampling step does not honor the boundaries of the parameters in our model and regularly tries sigmas that are negative resulting in NaN. We could fix this by checking if the parameters are within the bounds in the model function and if not return -Inf or we could happily ignore these warnings as importance_laplace_approx sets all NaNs to -Inf. So, did the importance sampling improve upon the estimated posterior? 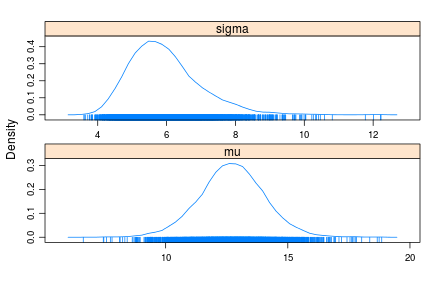 Disclaimer: I have not tested the function extensively so use it with a pinch of caution. Please tell me if you find an error in it!

I would like to thank Tal Galili for syndicating me on Rbloggers and Yihui Xie for the animation package with which the animations in this post were made.