Yet another visualization of the Bayesian Beta-Binomial model

The Beta-Binomial model is the “hello world” of Bayesian statistics. That is, it’s the first model you get to run, often before you even know what you are doing. There are many reasons for this:

That’s why I also introduced the Beta-Binomial model as the first model in my DataCamp course Fundamentals of Bayesian Data Analysis in R and quite a lot of people have asked me for the code I used to visualize the Beta-Binomial. Scroll to the bottom of this post if that’s what you want, otherwise, here is how I visualized the Beta-Binomial in my course given two successes and four failures:

The function that produces these plots is called prop_model (prop as in proportion) and takes a vector of TRUEs and FALSEs representing successes and failures. The visualization is created using the excellent ggridges package ( previously called joyplot). Here’s how you would use prop_model to produce the last plot in the animation above: 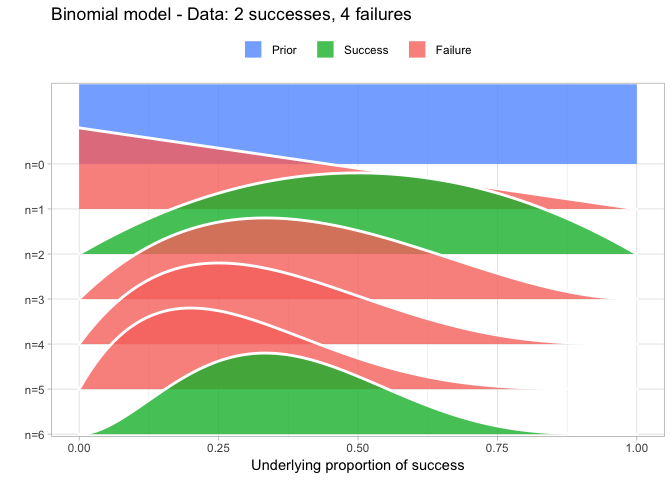 The result is, I think, a quite nice visualization of how the model’s knowledge about the parameter changes as data arrives. At n=0 the model doesn’t know anything and — as the default prior states that it’s equally likely the proportion of success is anything from 0.0 to 1.0 — the result is a big, blue, and uniform square. As more data arrives the probability distribution becomes more concentrated, with the final posterior distribution at n=6.

Some added features of prop_model is that it also plots larger data somewhat gracefully and that it returns a random sample from the posterior that can be further explored. For example:

To be clear, prop_model is not intended as anything serious, it’s just meant as a nice way of exploring the Beta-Binomial model when learning Bayesian statistics, maybe as part of a workshop exercise.