The BASIC programming language was at one point the most widely spread programming language. Many home computers in the 80s came with BASIC (like the Commodore 64 and the Apple II), and in the 90s both DOS and Windows 95 included a copy of the QBasic IDE. QBasic was also the first programming language I encountered (I used it to write a couple of really horrible text adventures). Now I haven’t programmed in BASIC for almost 20 years and I thought I would revisit this (from my current perspective) really weird language. As I spend a lot of time doing Bayesian data analysis, I though it would be interesting to see what a Bayesian analysis would look like if I only used the tool that I had 20 years ago, that is, BASIC.

This post walks through the implementation of the Metropolis-Hastings algorithm, a standard Markov chain Monte Carlo (MCMC) method that can be used to fit Bayesian models, in BASIC. I then use that to fit a Laplace distribution to the most adorable dataset that I could find: The number of wolf pups per den from a sample of 16 wold dens. Finally I summarize and plot the result, still using BASIC. So, the target audience of this post is the intersection of people that have programmed in BASIC and are into Bayesian computation. I’m sure you are out there. Let’s go!

There are many many different version of BASIC, but I’m going for the one that I grew up with: Microsoft QBasic 1.1 . Now, QBasic is a relatively new BASIC dialect that has many advanced features such as user defined types and (gasp!) functions. But I didn’t use any fancy functions back in the 90s, and so I’m going to write old school BASIC using line numbers and GOTO, which means that the code should be relatively easy to port to, say, Commodore 64 BASIC.

Getting QBasic is easy as it seems to be freeware, and can be downloaded here. Unless you are still using DOS, the next step would be to install the DOSBox emulator. Once you’ve started up QBASIC.EXE you are greeted with a friendly, bright blue IDE which you can try out by entering this customary hello world script that will clear the screen and print “HELLO WORLD”.

Note that in QBasic the line numbers are not strictly necessary, but in older BASICs (like the one for Commodore 64) they were necessary as the program was executed in the order given by the line numbers.

What are we going to implement?

We are going to implement the Metropolis-Hastings algorithm, a classic Markov chain Monte Carlo (MCMC) algorithm which is one of the first you’ll encounter if you study computational methods for fitting Bayesian models. This post won’t explain the actual algorithm, but the Wikipedia article is an ok introduction. 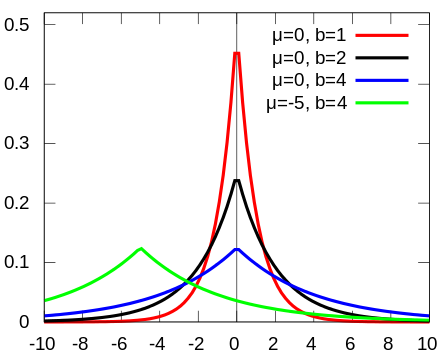 The data we are going to use is probably the cutest dataset I’ve worked with so far. It consists of counts of the number of wolf pups in a sample of 16 wolf dens ( source):

A reference implementation in R

Before delving into BASIC, here is a reference implementation in R of what we hope to achieve using BASIC: 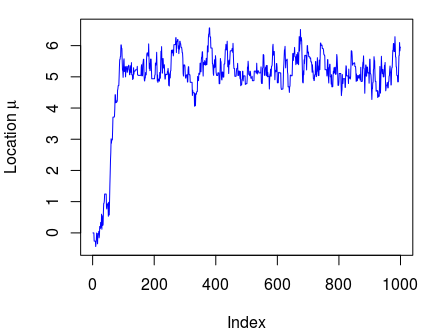 (For the love of Markov, do not actually use this R script as a reference, it is just there to show what the BASIC code will implement. If you want to do MCMC using Metropolis-Hastings in R, check out the MCMCmetrop1R in the MCMCpack package, or this Metropolis-Hastings script.

R is sometimes called “a quirky language”, but the script above is a wonder of clarity and brevity compared to how the BASIC code is going to look…

Implementing the model and Metropolis-Hastings in BASIC

Let’s start by clearing the screen (CLS) and defining the variables we need. Here DIM defines arrays and matrices.

Already in this short piece of code there are a lot of fun quirkiness going on:

Let’s continue with defining the model. It’s going to be written as a subroutine which is an isolated piece of code that ends with a RETURN statement. It can then be called with a GOSUB <line> statement which jumps to <line>, executes the code up to the RETURN statement and then jumps back to the line after the GOSUB. It is a little bit like a poor man’s function as you can’t pass in any arguments or return any values. But that’s not a problem since all variable names are global anyway, your subroutine can still access and set any variables as long as you are careful not to use the same variable name for two different things. The subroutine below assumes that the vector PARAMS! is set and will overwrite the LOGDENS! variable. The subroutine also uses READ X! to read in a value from the DATA and RESTORE to reset the READ to the first data point.

Here is now the Metropolis-Hastings algorithm. Nothing new here, except for that we now use GOSUB 520 to jump into the model subroutine at line 520 and that we use the RND statement to generate uniformly random numbers between 0.0 and 1.0. 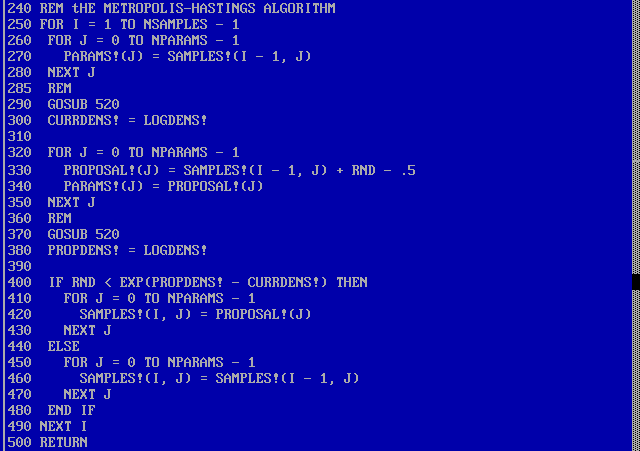 Summarizing it and plotting it

Now we could piece it all together by putting the following code directly after the initial declarations:

This will fill up SAMPLES! with 1000 MCMC draws from the posterior distribution of the location ($\mu$) and the log scale ($\log(b)$). But that won’t make us any happier, we still would need to summarize and plot the posterior. The code below takes the SAMPLES! matrix and calculates the mean and SD of the posterior, and a 95% credible interval (I usually prefer the median posterior and a quantile interval, but that would require much more coding, as there is no built in method for sorting arrays in BASIC.) 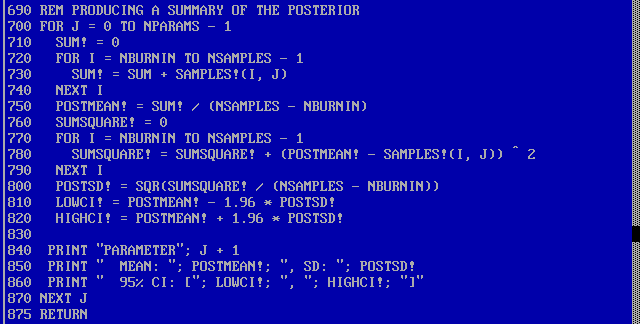 Finally we would like to draw a traceplot to make sure that the Markov chain looks ok. While there is no built in function for sorting, there is great graphics support! The bulk of the code below is mostly just rescaling the sample coordinates so that they fit the screen resolution (320 x 200). Notice also the fun syntax for drawing lines: LINE (<x1>, <y1>)-(<x2>, <y2>). That many of the BASIC statements feature “custom” syntax might be a symptom of that LINE, PRINT, IF, etc. are statements and not functions. 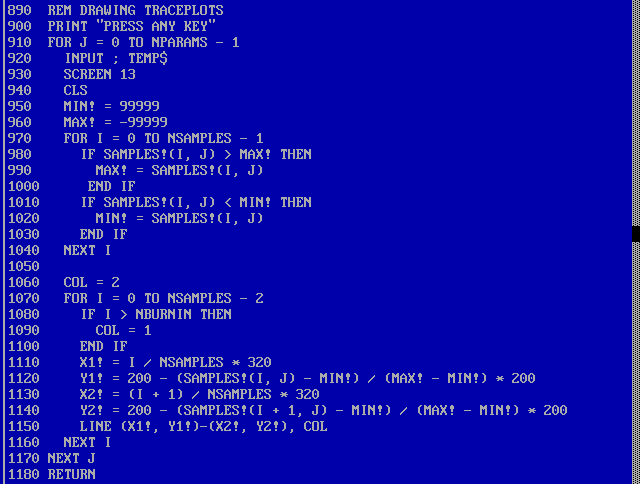 And finally we might want to write the samples to disk:

Now we are finally ready to piece everything together, sampling and plotting!

The last GOTO just jumps to the last line of the program which makes the program exit. If we set DOSBox to emulate the speed of a 33 MHz 386 PC (according to this page), it takes about a minute to generate the 1000 samples and summarize the result. Here is the output:

As drawing the lines of the traceplot is really slow we get the animation above “for free”. :)

So what about the wolf pups? Well, this exercise wasn’t really about data analysis, but looking at the posterior summary above it seems like a good guess is that the median number of wolf pups in a den is around 4.5 to 6.0. I should also point out that both the BASIC code and the “reference” implementation result in similar posteriors: 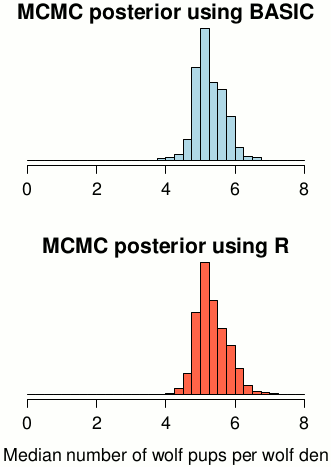 Here is the full program in text format ( MCMCDEMO.BAS), or, if you prefer, as a screenshot: 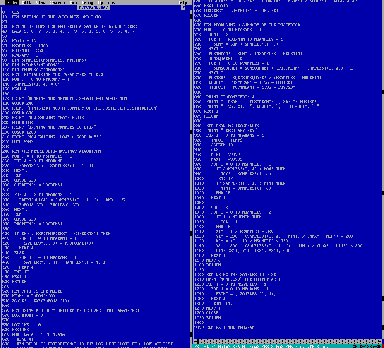 All in all, it seems like I could have done pretty advanced Bayesian statistics using the computational tools I had access to 20 years ago! (Of course, one could easily have implemented a similar program in C or FORTRAN much much earlier…) If this post has inspired you, and you wish to use BASIC as your main tool for scientific computing (please don’t!), you’ll find a host of QBasic tutorials here. You can also dive directly into the wonderful world of BASIC using this excellent javascript emulation of Apple II BASIC.

Some thoughts on BASIC