As the normal distribution is sort of the default choice when modeling continuous data (but not necessarily the best choice), the Poisson distribution is the default when modeling counts of events. Indeed, when all you know is the number of events during a certain period it is hard to think of any other distribution, whether you are modeling the number of deaths in the Prussian army due to horse kicks or the numer of goals scored in a football game. Like the t.test in R there is also a poisson.test that takes one or two samples of counts and spits out a p-value. But what if you have some counts, but don’t significantly feel like testing a null hypothesis? Stay tuned!

The original poisson.test function that comes with R is rather limited, and that makes it fairly simple to construct the Bayesian alternative. However, at first sight poisson.test may look more limited than it actually is. The one sample version just takes one count of events $x$ and the number of periods $T$ during which the number of events were counted. If your ice cream truck sold 14 ice creams during one day you would call the function like poisson.test(x = 14, T = 1). This seems limited, what if you have a number of counts, say you sell ice cream during a whole week, what to do then? The trick here is that you can add up the counts and the number of time periods and this will be perfectly fine. The code below will still give you an estimate for the underlying rate of ice cream sales per day:

Note that this only works if the counts are well modeled by the same Poisson distribution. If the ice cream sales are much higher on the weekends, adding up the counts might not be a good idea. poisson.test is also limited in that it can only handle two counts; you can compare the performance of your ice cream truck with just one competitor’s, no more. As the Bayesian alternative accepts the same input as poisson.test it inherits some of it’s limitations (but it can easily be extended, read on!). The model for the Bayesian First Aid alternative to the one sample possion.test is: 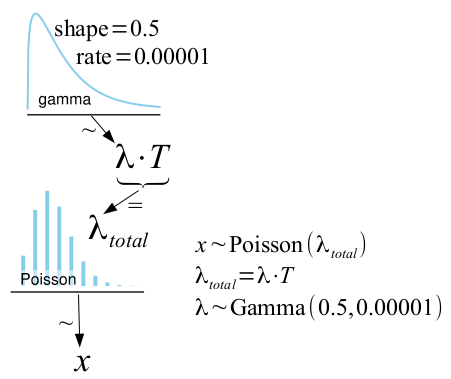 Here $x$ is again the count of events, $T$ is the number of periods, and $\lambda$ is the parameter of interest, the underlying rate at which the events occur. In the two sample case the one sample model is just separately fitted to each sample.

As $x$ is assumed to be Poisson distributed, all that is required to turn this into a fully Bayesian model is a prior on $\lambda$. In the the literature there are two common recommendations for an objective prior for the rate of a Poisson distribution. The first one is $p(\lambda) \propto 1 / \lambda$ which is the same as $p(log(\lambda)) \propto \text{const}$ and is proposed, for example, by Villegas (1977). While it can be argued that this prior is as non-informative as possible, it is problematic in that it will result in an improper posterior when the number of events is zero ($x = 0$). I feel that seeing zero events should tell the model something and, at least, not cause it to blow up. The second proposal is Jeffreys prior $p(\lambda) \propto 1 / \sqrt{\lambda}$, (as proposed by the great BUGS Book) which has a slight positive bias compared to the former prior but handles counts of zero just fine. The difference between these two priors is very small and will only matter when you have very few counts. Therefore the Bayesian First Aid alternative to poisson.test uses Jeffreys prior.

So if the model uses Jeffreys prior, what is the $\lambda \sim \text{Gamma}(0.5, 0.00001)$ doing in the model definition? Well, the computational framework underlying Bayesian First Aid is JAGS and in JAGS you build your model using probability distributions. The Jeffreys prior is not a proper probability distribution but it turns out that it can be reasonably well approximated by ${Gamma}(0.5, \epsilon)$ with $\epsilon \rightarrow 0$ (in the same way as $\lambda \propto 1 / \lambda$ can be approximated by ${Gamma}(\epsilon, \epsilon)$ with $\epsilon \rightarrow 0$). 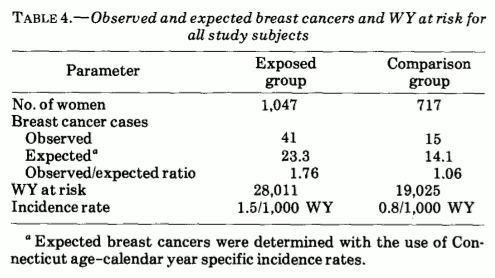 Here WY stand for woman-years (as if woman-years would be different from man-years, or person-years…). While the data is from a relatively old article we are going to replicate a more recent reanalysis of that data from the article Testing the Ratio of Two Poisson Rates by Gu et al. (2008). They tested the alternative hypothesis that the rate of breast cancer per person-year would be 1.5 times greater in the group that was X-rayed compared to the control group. They tested it like this:

The warning here is nothing to worry about, there is no need to specify what alternative is tested and bayes.poisson.test just tells you that. So sure, the evidence is far from conclusive, but given the data and the model there is a 75% probability that the incidence rate is more than 1.5 times higher in the X-rayed group. That is, rather than just saying that there is not enough evidence we have quantified how much evidence there is, and the evidence actually slightly favors the alternative hypothesis. This is also easily seen in the default plot of bayes.poisson.test: 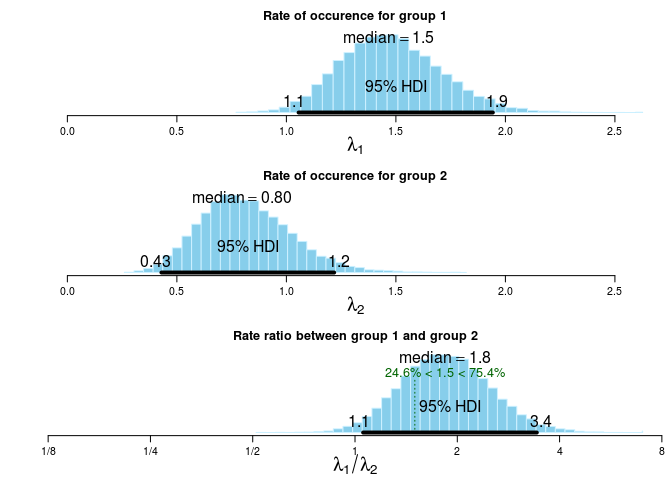 Back to the ice cream truck, say that you sold 14 ice creams in one day and your competitors Karl and Anna sold 22 and 7 ice creams, respectively. How would you estimate and compare the underlying rates of sold ice creams of these three trucks when bayes.poisson.test only accepts counts from two groups? When you want to go off the beaten path the model.code function is your friend as it takes the result from Bayesian First Aid method and returns R and JAGS code that replicates the analysis you just ran. In this case start by running the model with two counts and then print out the model code:

Just copy-n-paste this code directly into an R script and make the following changes:

And that’s it! Now we can run the model script and take a look at the estimated rates of ice cream sales for the three trucks. 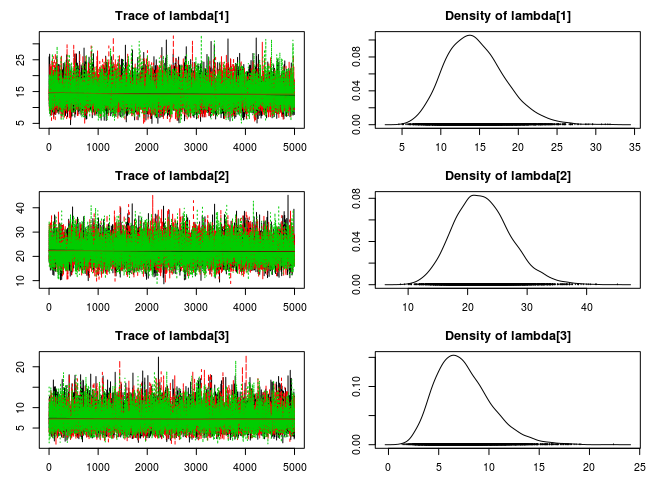