The Most Comprehensive Review of Comic Books Teaching Statistics

As I’m more or less an autodidact when it comes to statistics, I have a weak spot for books that try to introduce statistics in an accessible and pedagogical way. I have therefore collected what I believe are all books that introduces statistics using comics (at least those written in English). What follows are highly subjective reviews of those four books. If you know of any other comic book on statistics, please do tell me!

I’ll start with a tl;dr version of the reviews, but first here are the four books: 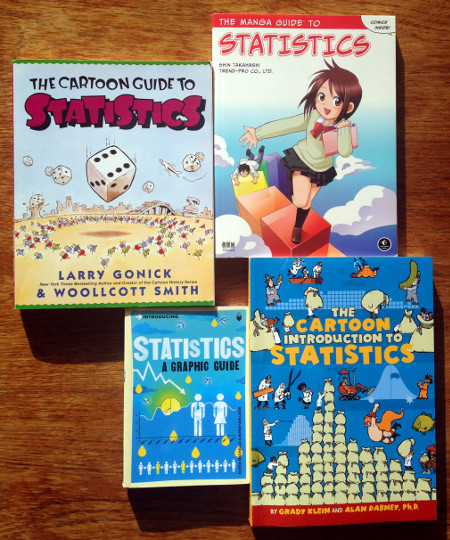 The Cartoon Guide to Statistics

Written in 1993 by Larry Gonick and Woollcott Smith this is still the book, out of the four reviewed, that feels most up to date. It covers a wide range of topics starting with summary statistics and basic probability and working its way through probability distributions, experimental design, confidence intervals and linear regression. It even touches on more advanced subjects such as resampling methods. The book is not written as a standard comic book with panels and a story line, rather it is a well written, easy going text that is accompanied by the fun and lively sketches by Larry Gonick. 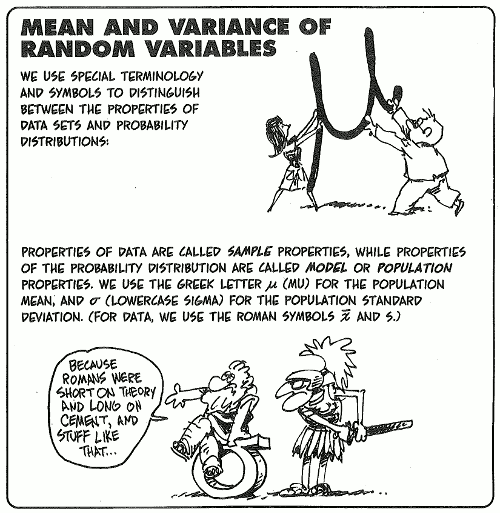 The book doesn’t skimp on the mathematical notation, which might put some off, but the presentation is still more accessible than most of the introductory stats books I’ve come across. If you are interested in the statistical programming language R, a thing to note is that many of the graphs in the book are made with S, the precursor to R, like the scatter plot below:

Like all the books reviewed here the Cartoon Guide to Statistics is focused on frequentist statistics, but at least the Bayesian perspective gets a mention: 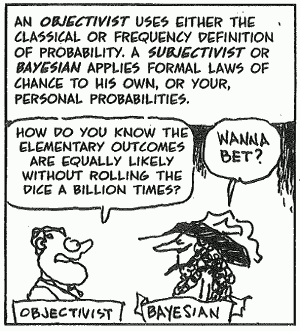 This is a great book which is witty and pleasant to read (+ it is pretty cheap). Highly recommended!

Update: This book has now been revised and published as a second edition (in 2016). Be sure to get that!

Amazon link: The Cartoon Guide to Statistics, 2nd edition (Note that at time of writing the Kindle version available on Amazon is still the first edition)

The Manga Guide to Statistics

This book, written by Shin Takahashi and illustrated by Iroha Inoue, is one in a long series of Manga Guides translated and published by No Starch Press. Like the Manga Guide to Databases or the Manga Guide to Calculus, the Manga Guide to Statistics takes a subject with a reputation for being difficult and technical and adds a cliché story full of huge eyes, naive schoolgirls and geeky geeks without any social ability. 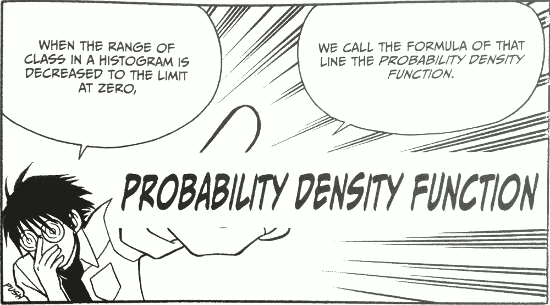 As opposed to the Cartoon Guide to Statistics the Manga Guide reads more like a standard comic book with panels and a story line. The story centers around the schoolgirl Rui who wants to learn statistics to impress the handsome Mr. Igarashi. To her rescue comes Mr. Yamamoto, a stats nerd with thick glasses. The story and the artwork is archetypal manga (including very stereotype gender roles) but if you can live with that it is a pretty fun story. 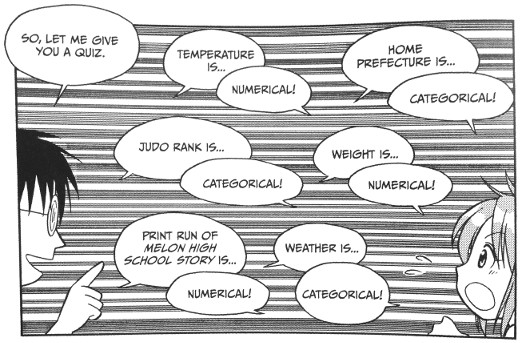 Quite a lot of space in the book is devoted to the storyline rather that to teaching statistics and to compensate for this there are text passages interspersed between the manga passages. Still the book doesn’t cover that much ground and except for basic graphs and summary statistics the book is focused on classical hypothesis testing. 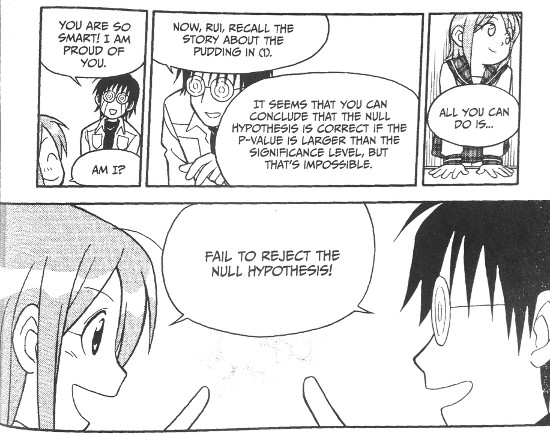 The book also describes the basic probability distributions but mostly from a hypothesis testing perspective, which feels a bit odd. I could imagine that without any background in statistics a reader of the Manga Guide would find it quite hard to understand the rational for actually performing hypothesis tests. Maybe a good companion will be the soon to be released Manga Guide to Regression Analysis…

The Cartoon Introduction to Statistics

A book by Grady Klein and Alan Dabney with a similar aim and a deceptively similar name to The Cartoon Guide to Statistics. I, however, found the Cartoon Introduction lacking in almost all aspects compared to the Cartoon Guide. The artwork didn’t click with me, somehow it looks like the characters lack outlines and the illustrations distracts from the text rather than enhances it. The most irritating… aspect of the… book is that… most sentences are spread out… over many panels. 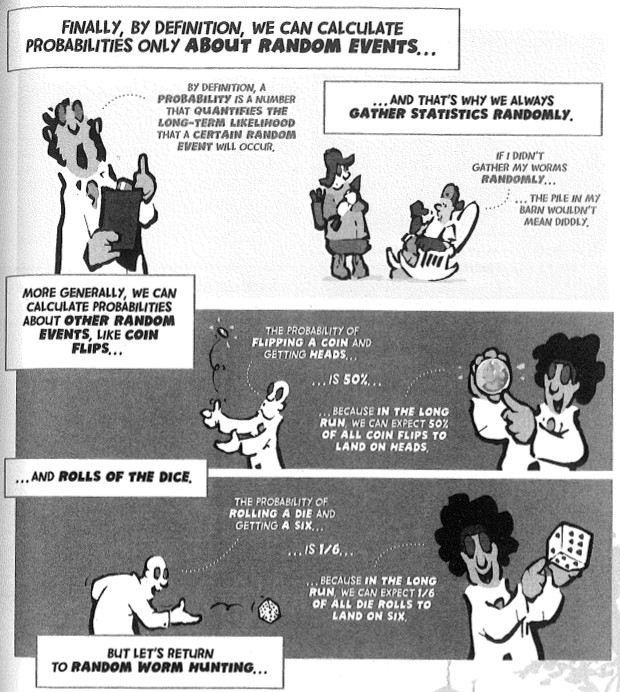 This “dilution” of the text makes it hard to follow and for a book of ~200 pages it covers relatively few concepts. I’ve also got a gripe with what the book covers as it is extremely focused on normal sampling distributions. Sure it is an important concept in classical statistics but it takes up a really large part of the book while other important concepts, such as probability, get little attention. This being a new book (2013) it is strange that it does not mention Bayesian statistics at all, it is actually the most frequentist book of all the books reviewed here. However, when looking at how confidence intervals are characterized it seems like the book actually is describing a Bayesian credible interval… 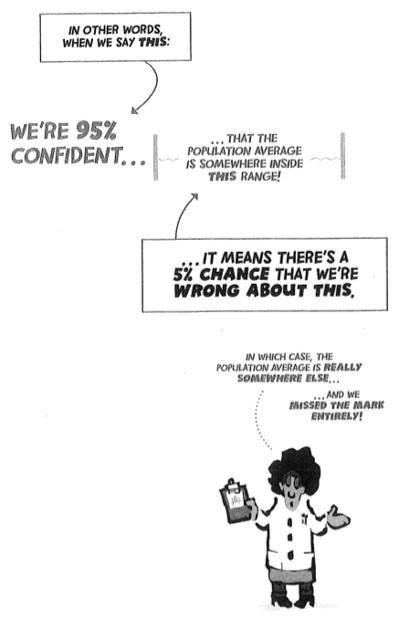 See also this review of the Cartoon Introduction to Statistics by Christian P. Robert.

Wow! This is an odd book that might be one of the worst introductions to statistics you can get as a beginner. The artwork by the surrealist painter Borin van Loon is truly surreal. Perhaps it is hip and cool (and perhaps I’m not cool enough), but it definitely does not add clarity to the subject the the book aims to introduce. The worst part of the book is the text which introduces statistical concepts and historical facts in a completely haphazard order. The book is very focused on early statistical scientists such as Galton, Pearson, Gosset and Fisher, and here is one of the many surreal versions of Pearson’s head: 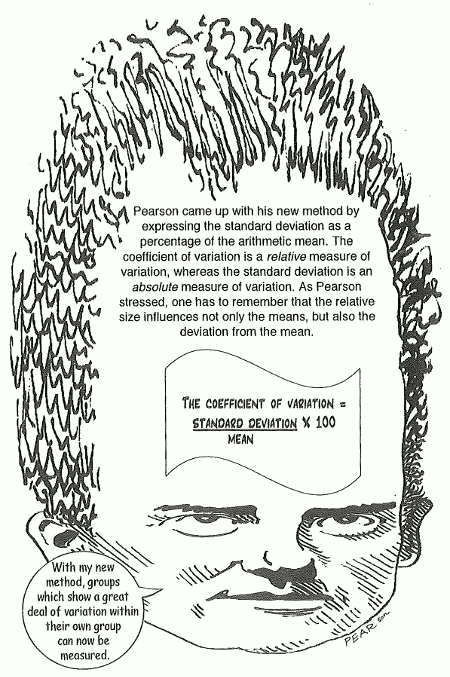 Notice the speech balloon, coming out of Pearson’s mouth, which does not make sense. What does it mean to measure a group and why would the coefficient of variation help when measuring groups with “a great deal of variation”? In general there are a lot of statements in this book that does not make sense or that are plain wrong. A random sample:

The list could go on, so why not let it?

Or what about this panel on “higher mathematics”:

If it is not clear by now, this is not a book I recommend unless you really are looking for a surreal introduction to statistics…