Does pill A or pill B save the most lives? Which web design results in the most clicks? Which in vitro fertilization technique results in the largest number of happy babies? A lot of questions out there involves estimating the proportion or relative frequency of success of two or more groups (where success could be a saved life, a click on a link, or a happy baby) and there exists a little known R function that does just that, prop.test. Here I’ll present the Bayesian First Aid version of this procedure. A word of caution, the example data I’ll use is mostly from the Journal of Human Reproduction and as such it might be slightly NSFW :) 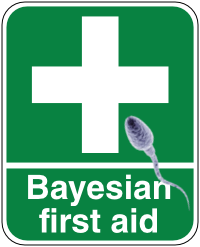 To demonstrate the use of bayes.prop.test I will use data from the Kinsey Institute for Research in Sex, Gender and Reproduction as described in the article Genital asymmetry in men by Bogaert (1997). The data consists of survey answers from 6544 “postpubertal males with no convictions for felonies or misdemeanours” where the respondents, among other things, were asked two questions:

I don’t know about you, but the first question I had was are right handed people more like to have it on the right, or perhaps the oposite? Here is the raw data given by Bogaert:

Not too bad, we get both a confidence interval on the difference between the groups and maximum likelihood estimates. Let’s compare this with the Bayesian First Aid version:

Pretty similar estimates (and they should be) but now we also get estimates [and credible intervals] for both groups and the group difference. Looking at the estimates it seems like both left and right-handers tend to lean to the left much more often than to the right. We also get to know that the probability that left-handers lean more often to the right compared to right-handers is 97.7%. Interesting! Let’s look at this relation further by plotting the posterior distribution: 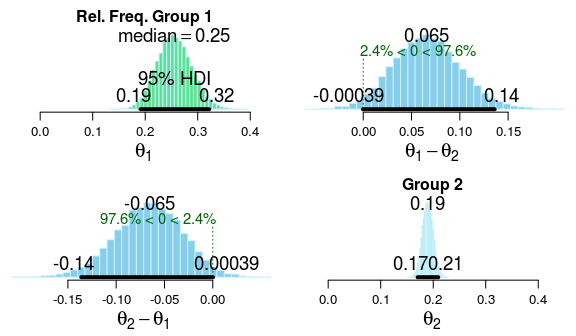 So, it is most likely that left-handers lean more to the right by around 6-7 percentage points (and Bogaert discusses some reasons why this might be the case). Still the posterior of the group difference is pretty wide (and the credible interval kisses the 0.0) and even though the analysis is leaning (he he) towards there being a difference it would be nice to have a few more data points to get a tighter estimate.

I don’t like Pearson’s chi-squared test, it is used as a catch-all analysis for any tables of counts and what you get back is utterly uninformative: a p-value relating to the null hypothesis that the row variable is completely independent of the column variable (which is anyway known to be false a priori most of the time, see here and here for some discussion). If you have counts of successes for many groups and are interested in actually estimating group differences bayes.prop.test can also be used as a replacement for chisq.test. Let’s look at an example, again with data from the Journal of Human Reproduction.

When doing in vitro fertilization the egg is fertilized by sperm outside the body and later, if successfully fertilized, reinserted into the uterus. The egg and the sperms are usually left together to co-incubate for more than an hour before the egg is separated from the sperm and left to incubate for itself. Bungum et al. (2006) was interested in comparing if an ultra-short co-incubation period of 30 s. would work as well as a more conventional co-incubation period of 90 m. Bungum et al. used a 30 s. co-incubation period on 389 eggs and a 90 min. period on another batch of 388 eggs and looked at a number of measures such as the number of fertilized eggs and the number of resulting embryos graded as high quality. Their analysis of the result is summarized in the table below: 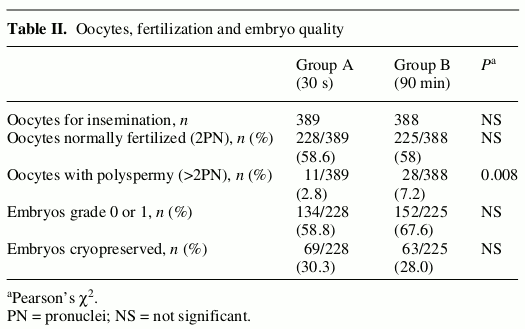 Unfortunately they use chi-square tests to analyze these counts and they don’t even report the full p-values, for all but one of the measures all we get to know is NS. Just looking at the raw data it seems like there is little difference between the proportions of fertilized eggs in the two groups, but there seems to be a difference in embryo quality with more embryos in the 90 min. group being of high quality (defined as grade 0 and 1). But the chi-square analysis says NS which is interpreted in the result section as: “the two groups were comparable”. Let’s analyze the data with bayes.prop.test: 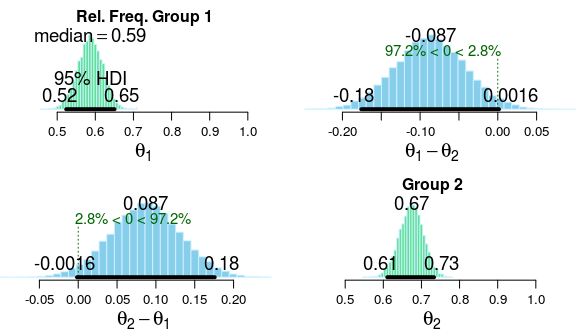 Looking at the posterior it seems like there is actually some evidence for that the 30 s. procedure results in fewer embryos of good quality as most of the posterior probability is centered around a difference of 6-12% percentage points. Sure, the credible interval kisses zero, but the evidence for a small difference, which was hinted at in the original article, is definitely not strong.

Caveat: I know very little about in vitro fertilization and this is definitely not a critique of the study in any way. I don’t know what would be considered a region of practical equivalence in this case and I don’t know if embryo quality is considered an important outcome. However, I still believe that the analysis would have been more informative if they would have used something better than chi-square tests and p-values!

Like prop.test, bayes.prop.test can be used to compare more than two groups. Here is an example with a dataset from the prop.test help file on the number of smokers in four groups of patients with lung cancer. 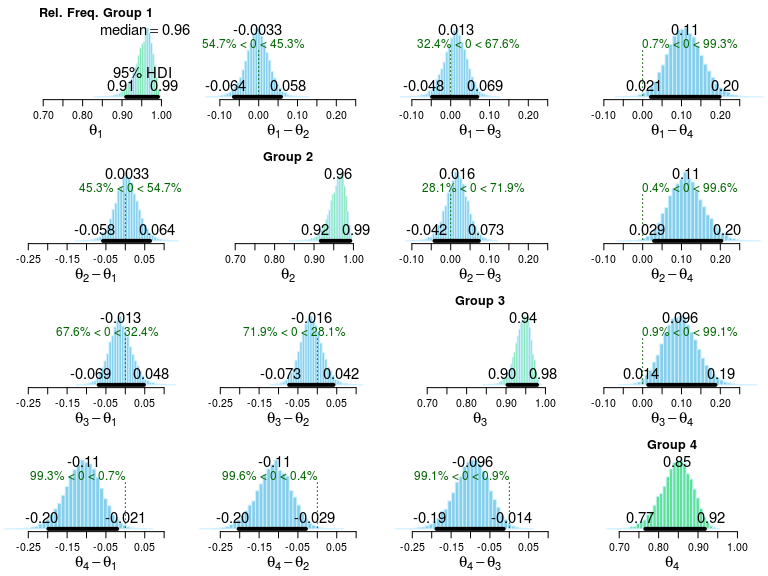 As is shown both in the print out and in the plot, group 4 seems to differ slightly from the rest. While bayes.prop.test can be used to compare more than four groups both the printouts and the plots start to get a bit overwhelming when there are too many groups. A remedy for this is to use the model.code function that prints out JAGS and R code that replicates the model you have fitted with bayes.prop.test and to customize this code further to make the plots and comparisons you are interested in.

Another reason to modify the code that is printed out by model.code is in order to change the assumptions of the model. The current model does not assume any dependency between the groups and if this is an unreasonable assumption you might want to modify the model code to include such a dependency. A nice example of how to extend the model to assume a hierarchical dependency between the relative frequencies of success of each group can be found on the LingPipe blog. Hierarchical binomial models are also discussed in chapter 9 in Kruschke’s Doing Bayesian Data Analysis and in section 5.3 in Gelman et al.’s Bayesian Data Analysis.