I had a great time at useR 2013 in Albacete, Spain. The food was great, the people were fun and the weather was hot. A pleasant surprise was that I won the useR data analysis contest with my submission “Modeling Match Results in La Liga Using a Hierarchical Bayesian Poisson Model.” It was a fun exercise modeling football scores and I might write a post about it later, for now you can download my original submission here if you’re interested.

I also got great feedback on my talk “The State of Naming Conventions in R”. The message I was trying to get across was basically:

The talk was based on a short article I got into the RJournal and here are the slides: 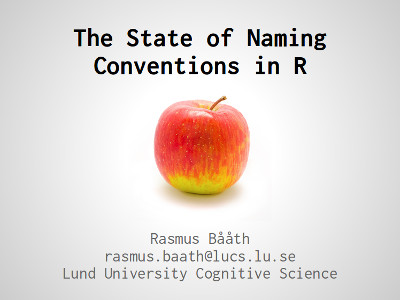 Some more awesomeness from UseR 2013: