For the second year round I and Ullrika Sahlin arranged the mini-conference Bayes@Lund, with the aim of bringing together researchers in the south of Sweden working with Bayesian methods. This year the committee was also beefed up by Paul Caplat and Krzysztof Podgorski. What originally made me and Ullrika start this get-together is our feeling that Lund University is lagging behind with regards to Bayesian methods (we don’t have a single introductory course on Bayes stats!) and that we need a venue where people doing Bayes can meet and discuss what cool stuff they are working on. And so, last Tuesday, over 60 researchers got together to listen to twelve interesting talks, discuss, and (not least) fika. Here follows some highlights from Bayes@Lund 2015.

The conference started with Krzysztof Podgorski presenting “Bayes from a frequentist point of view” in where he discussed the connection between a frequentist and Bayesian view of statistics. He came to the conclusion that Bayes is pretty ok (thank god, otherwise we could just go home!). However, I’m not so convinced that Empirical Bayes is the golden mean, but here we might agree to disagree. Instead of focusing on foundational issues, Behnaz Pirzamanbin and Kerstin Johnsson showed what cool applications are possible using Bayesian modeling. Behnaz presented a model for estimating what land types have covered Europe during the last 5000 years (!) and Kerstin applied Bayesian hierarchical modeling to the problem of identifying cell populations using flow cytometry data.

Umberto Picchini described a new scheme for doing maximum likelihood estimation using approximate Bayesian computation, and to be honest, before the talk I thought this sounded a bit like “crossing the brook to get the water” (Swedish proverb) but after his talk I can see how it could be useful. Another thing that could be useful was the work of Måns Magnusson on making Latent Dirichlet allocation easier to parallelize. Geoffrey Patching talked about “Teaching Bayesian data analysis in psychology” a subject dear to me (I really think psychology would be better off with a little less p and a little more B). One obstacle of getting Bayes into the curriculum, that he highlighted, is the almost catch-22 situation where it’s hard to teach Bayes unless the students use R or Python, but where there is little incentive to switch away from SPSS as long as the curriculum only includes classical statistics.

A high point of the conference was the keynote presentation “Bayesian Model Inference - Why, What And How? (And When Not)” by Mattias Villani from Linköpings University. Mattias, who describes himself as a “natural born Bayesian”, talked about the pros and cons of Bayes factors, with some interesting examples of when it works and when the results are “just garbage” (hint: uninformative priors). If you are interested, his slides are available here.

Here’s the full program to the conference, sure it’s already over, but perhaps you want to join us next year? :) Finally here is a picture of me (to the right) telling the story of Karl Broman’s Socks (if you squint you can see a picture of a sock-picking-process) and to the left is Jonas Wallin who presented “Estimation of local moose populations using Bayesian hierarchical modelling”, what else to expect from a Swedish mini-conference on Bayesian methods? :) 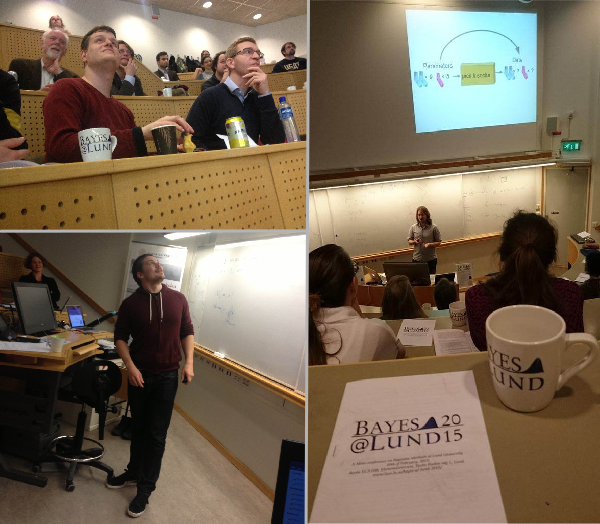